“Oh hai Smashing Magazine!” That’s one of the dozen ways that Flickr welcomes its users upon signing in every time. It’s an easily overlooked detail, one that the service would work without flawlessly. Yet this detail is a big part of Flickr’s particular design character that would be missed if it wasn’t there.

This is how Flickr greets its users, changing the language upon every sign-in.

These easily overlooked details are the ones that I’m particularly interested in because of the reaction they are capable of causing in users. These details trigger an emotional response, and if used purposefully and fittingly, they will help to form a personality that people will respond to positively when interacting with the product.

This positive attitude will often lead to people sharing and even advocating for your product with their peers. This technique of connecting with users on a personal level is also referred to as “emotional design.”

The term “emotional design” was defined by (among others) Aarron Walter. In his book Designing for Emotion, he describes emotional design by building on Maslow’s famous hierarchy of human needs, which posits that humans need to achieve elementary states of being, such as health and safety, before they can start thinking about higher-level needs, such as self-actualization. People who are seriously ill or lack safety would find it difficult to think about self-actualization as expressed, for example, in morality, creativity and problem-solving. 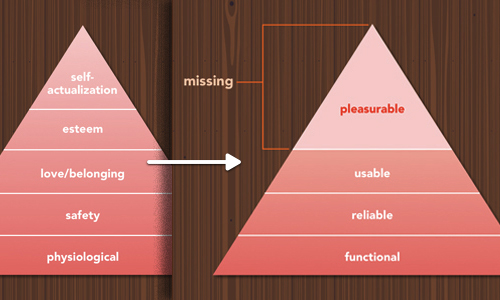 In this article, we will look at some strategies you can follow, as well as some examples found in the wild, plus a few projects in which the consistent use of emotional design results in a great personality.

To learn more about the theory of emotion in design, you might be interested in the article “Not Just Pretty: Building Emotion Into Your Websites.”

The Elements Of Emotional Design

The goal is to connect with users and evoke positive emotions. Positive emotions instill positive memories and make users want to interact with your product in the future.

There’s an additional benefit, though. In pleasant, positive situations, people are much more likely to tolerate minor difficulties and irrelevance. While poor design is never excusable, when people are relaxed, the pleasant and pleasurable aspects of a design will make them more forgiving of problems within the interface.

Below is a non-exhaustive list (based on personal observation) of ways to induce these positive emotions. Of course, people will respond to things differently depending on their background, knowledge, etc., but these psychological factors should work in general:

Have you shared something lately that you were excited about because it was different, lovely, surprising, attractive or appealing in some way? Have you built something like that? Let us know in the comments section below!

And if you’d like to learn even more about emotional design, here is a good list of further resources.